The Museum’s Mosaic Collection includes more than 50 pieces of mosaic floor that found during excavations in the Early Christian basilica which once stood close to the watercourse of the Ilissos River and in two sites in Euripidou and in Dioysiou Areopagitou street in Athens.  The mosaic floor of the Ilissos basilica was discovered in 1916 and 1917 during the excavation conducted by the archaeologist, and later Director of the Museum Georgios Sotiriou.  The parts of the mosaic pavement from the Dionysiou Areopagitou excavation were covering the floor entrance of the Museum from 1970 till 2014. 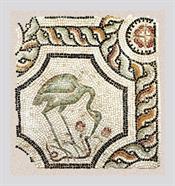